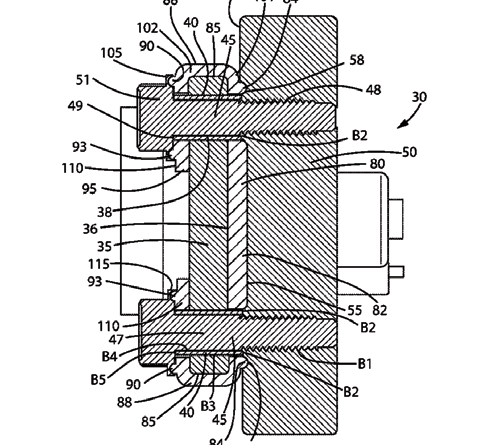 Self-Piercing Rivet and Self-Piercing Riveting Method and Self-Piercing Riveted Joint
United States Patent 11,333,187
Issued May 17, 2022
Inventors: Steffen Hofmann, Giessen, Germany; Paul Bartig, Giessen, Germany; Frank Wilhelm, Giessen, Germany; and Matthais Wissling, Giessen, Germany
Assignee: Newfrey LLC, New Britain, CT, USA
A riveted joint comprising: an upper workpiece and a lower workpiece, and a self-piercing rivet. The rivet in an undeformed state, before the creation of the riveted joint, included: a head defining a head diameter (DH); a shank defining a shank diameter (DS); and a foot end opposite the head. Radially outward at the foot end is a flat surface facing away from the head; and an axial recess located radially inward of the flat surface, partly defined in the foot end, open axially away from the head, and frustoconical in longitudinal cross section. The axial recess defining an axial depth (LB). The ratio of recess axial depth (LB) to shank diameter (DS) is less than 0.3. And in a deformed state, after the creation of the riveted joint, the rivet extends through the first workpiece and penetrates the second workpiece; and the head bears against the upper surface.

Captive Fastener with Push Out Cam and Hold Out Clip
United States Patent 11,313,406
Issued April 26, 2022
Inventors: Benjamin Phan, Arcadia, CA, USA; Simon Ly, Rosemead, CA, USA; An Tran, Rosemead, CA, USA; Patrick Tran, Arcadia, CA, USA; Yuriy Bern, North Hollywood, CA, USA; Larisa Zilber, Northridge, CA, USA; Jeffrey Hang, Rosemead, CA, USA; and Dennis Suedkamp, Porter Ranch, CA, USA
Assignee: Fastener Technology Corporation, North Hollywood, CA, USA
A captive fastener is disclosed having a longitudinal slot along the shank for receiving a hold-out clip, and a chamber that houses a retractable cam member. The cam member is spring actuated to extend out of the shank and can be retracted into the cavity against the bias of the spring to pass through a primary panel and subpanel. The cam member is shaped to counter-rotate in the presence of a traverse force, such as the panel bearing against it.

Segmented Nut
United States Patent 11,300,151
Issued April 12, 2022
Inventor: Brian Bradshaw, Mandurah, Australia
Assignee: Segnut Pty Ltd, Mandurah, Australia
A segmented nut is formed by three segments held together with a sleeve for transport and fastening use. Rotation of the sleeve, such as in the order of 60°, frees the segments, allowing for quick release of the nut.

Injection Molded Rivet-Style Fastener and Housing with Snap Assembly Functionality Along with an Injection Molding Process for Producing Such a Rivet without an Undercut Feature
United States Patent 11,293,471
Issued April 5, 2022
Inventor: Steve Porter, Auburn Hills, MI, USA
Assignee: U.S. Farathane Corporation, Auburn Hills, MI, USA
A fastener assembly including a hollow and structurally collapsible stem over an intermediate extending range, a solid end most extending portion being structurally rigid. A receiving portion is constructed of a deformable material having a surface, within which is configured an inner rim defined edge of a deformable material. The inner rim edge can include either of a flat profile or a chamfered shape with a narrowed profile, a diameter of an aperture bounded by the chamfered edge being less than a diameter of the solid end portion so that, upon insertion and passage of the solid portion through the narrowed rim profile, initial deformation of the chamfered rim edge shape preceding alignment of the interiorly hollowed portion, which is subsequently caused to exhibit a controlled collapse by the rim edge in order to secure the stem within the receiving portion.

Fasteners Having Enhanced Electrical Energy Dispersion Properties
United States Patent 11,293,474
Issued April 5, 2022
Inventors: Tanni Sisco, Mukilteo, WA, USA; Antonio Carlos Rufin, Seattle, WA, USA; Richard B. Tanner, Seattle, WA, USA; Dale Winter, Maple Valley, WA, USA; Jeffery Alan Wilkerson, Everett, WA, USA; and Joe Heeter, Seattle, WA, USA
Assignee: The Boeing Company, Chicago, IL, USA
Systems and methods are provided for fabricating fasteners. One embodiment is an apparatus that includes a fastener. The fastener includes a head, a cylindrical shank that extends from the head and is dimensioned to engage in a fit with a corresponding hole, and a coating that is discontinuously speckled around a circumference of the shank and extends axially along the shank, leaving irregular portions of a surface of the shank exposed. The coating exhibits a higher lubricity than the surface, and the coating exhibits a higher dielectric withstand voltage than the surface.

Screw
United States Patent 11,293,475
Issued April 5, 2022
Inventors: Kuo-Tai Hsu, Tainan, Taiwan; and Ming-Hao Hsu, Tainan, Taiwan
A screw includes a head and a shank extending from the head and defining a longitudinal axis. A thread is provided on the shank. The head includes a top portion and a cone portion located between the top portion and the shank. A plurality of recesses is provided in a peripheral surface of the cone portion and spaced in a circumferential direction of the cone portion. Each recess includes first and second side edges opposite to each other in the circumferential direction and an upper edge connecting the first and second side edges. The first side edge features a maximum recess depth greater than a maximum recess depth of the second side edge. The top edge extending in the circumferential direction of the cone portion is partially arranged between the top portion and the first side edge of an adjacent recess in the longitudinal axis direction.