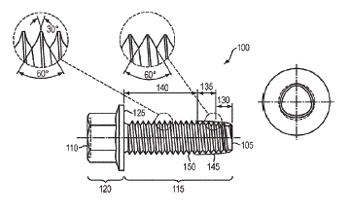 Threaded Fastener Having a Thread Crest Freater than its Thread Root and V Angles on the Crest and Root
United States Patent 11,111,947
Issued September 7, 2021
Inventor: Gary Jack Reed, Turlock, CA, USA
Assignee: LOCK-N-STITCH, INC., Turlock, CA, USA
An interlocking thread with a tooth cross- section that is wider at its crest than at its root and with “V” angles located both along the crest and the root which tightens into a tapped hole that has a similar thread cross-section.

Grooved Nut for Blind Fastening, Rivet and Assembly Comprising Such a Nut
United States Patent 11,111,943
Issue September 7, 2021
Inventors: Loic Meiffre, Conflans Ste-Honorine, France; Guy Pailhories, Villefranche de Rouergue,
France; and Christophe Vandaele, Le Bouscat, France Assignee: LISI Aerospace, Paris, France
A nut (32) for assembling elements of a structure comprises a collar (64) capable of coming into contact with a front face of the structure; a tightening zone having an outer diameter (86) capable of being inserted into a hole of the structure; a deformation zone adjacent to the tightening zone and capable of forming a bulge against a rear face of the structure, opposite the front face; and a tapped portion (65) adjacent to the deformation zone. The nut may include grooving (82) on an outer circumference of at least one part of the deformation zone, a maximum diameter of said grooving (82) being less than or equal to the outer diameter (86) of the tightening zone.

Screw-Type Fastener
United States Patent 11,105,361
Issued August 31, 2021
Inventors: Farhad Lajewardi, Toronto, CA, USA; Michael K. Falkenstein, Toronto, CA, USA; and Beesham
Mahadeo, Ontario, CA, USA
Assignee: The Hillman Group, Inc., Cincinnati, OH, USA
A screw includes: a head end, a shank and a tapered end, the head end including a tool engaging part, the head end located at one end of the shank and the tapered end located at an opposite end of the shank, wherein a thread is formed along the shank, the thread begins on the tapered end, extends onto the shank and terminates at a set location short of the head end, the thread being a right-hand thread and having a peripheral edge, at least a first helical portion of the peripheral edge includes a plurality of notches and a second helical portion of the thread lacks any notches, wherein the first helical portion is closer to the tapered end than the second helical portion, wherein the head includes an underside formed by a frustoconical part with a plurality of nibs. The head may also include an outer ledge.

One-Piece Self-Locking Nut
United States Patent 11,098,748
Issued August 24, 2021
Inventor: Arnold R. Limatoc, Aiea, HI, USA
Assignee: Crushlock, Inc., Chuluota, FL, USA
A self-locking nut includes a main-nut body and a deformable nut body. The main nut body has a recess leading into an interior threaded bore forming x turns of an internal thread therein. The deformable nut body has an outer flange and an interior threaded bore forming y turns of an internal thread therein. The outer flange of the deformable-nut body is fixed to the main-nut body such that a relief space is formed between the deformable-nut body and the recess. A ratio of x:y is about 2:1.

Anti-Loosening Fastener
United States Patent 11,092,188
Issued August 17, 2021
Inventor: Richard C. Sicard, Stoughton, MA, USA
An anti-loosening fastener including a key-bolt-receiving bolt, including a head section to receive at least one tool thereon, a rear cylindrical section disposed on at least a portion of the head section to extend a predetermined distance away from the head section, the rear cylindrical section including a keybolt- receiving aperture disposed within at least a portion of the rear cylindrical section to receive an external fastener therein, and an internal thread section circumferentially disposed on an inner surface within the key-bolt-receiving aperture, and a key bolt to removably connect to at least a portion of the key-bolt-receiving bolt.

Shearable Fastener Bolt and Method for Clamping Electric Wires, and Electrical Connector Comprising a Zero-Protrusion Shearable Fastener
United States Patent 11,092,185
Issued August 17, 2021
Inventors: Bruno Peltier, St. Apollinaire, France; and Julien Dossmann, Gevrey-Chambertin, France
Assignee: Tyco Electronics Simel SAS, Gevrey-Chambertin, France
A fastener bolt for clamping an electric wire includes a bolt part and a nut part. The bolt part has a head section, a thread section and a shearing section connecting the head section and the thread section. The nut part is screwed onto the thread section. The shearing section is configured to break if a predetermined fastening torque is exceeded. The thread section is hollow and has a predetermined tensile breaking strength.

Metal Fastener with Embedded RFID Tag and Method of Production
United States Patent 11,080,584
Issued August 3, 2021
Inventors: Geoffrey Grove, Providence, RI, USA; Tao Wei, Kingston, RI, USA; and Otto Gregory, Kingston,
RI, USA
Assignees: Pilgrim Screw Corporation, Providence, RI, USA; and Rhode Island Council on Postsecondary
Education, Warwick, RI, USA
The present disclosure is generally directed to an RFID tag for use with a metal fastener where the fastener operates as the antenna of the RFID tag. The RFID tag includes a microchip for storing data. The chip is electrically coupled to the metal fastener in order to receive and transmit the RF signal, the metal fastener thereby operating as the antenna for the RFID tag.

Fastener Assembly
United States Patent 11,078,943
Issued August 3, 2021
Inventor: Hector Alberto Martinez Vite, Toluca, Mexcio
Assignee: GM Global Technology Operations LLC, Detroit, MI, USA
A fastener assembly according to the present disclosure includes a fastener head, a shank depending from the fastener head and at least one wing member pivotably coupled to the shank. The shank extends along a central axis, and the wing member is pivotable about a pivot axis extending parallel to the central axis. The wing member is pivotable between a stowed position and a deployed position. The wing member has a fork configured to receive a workpiece therein when in the deployed position.