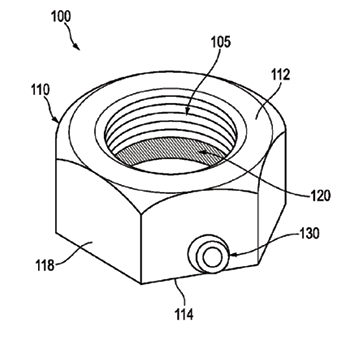 Patents as compile by the editors for Fastener Technology International from USPTO in December.

Fastener and Installation Method for Very Thin Sheets
US Patent 11498166
Issued November 15, 2022
Inventor: Michael J. Maloney, Doylestown, PA, USA; and Brian G. Bentrim, Furiong, PA, USA
Assignee: Penn Engineering & Manufacturing Corp., Danboro, PA, USA
A clinch-in fastener with a cylindrical body having a top, a bottom, sides and an axial internal bore. The fastener has a single shank at the bottom end of the body having a top surface orthogonal to the bore and a chamfer tapering to the bottom of the body. The top surface of the shank is adapted for receiving the cold flow of material surrounding a receiving hole of a workpiece. The shank may have a plurality of notches in its outermost edge that extend through both the top surface of the shank and the chamfer. The bore of the fastener extends completely through the fastener body from top to bottom and may be threaded. A fastener installation system having a tool with means for affixation to a rotary and vertically reciprocal element of an industrial machine. The tip of the tool has a distal end face with at least one arcuate displacer adapted for deforming a workpiece as the tool rotates and is pressed against the workpiece. A bore within the tip holds a fastener installed by the tool. The displacer is vertically and radially tapered along an arcuate ridge centered about the axial bore. The width of the displacer is also tapered to a point.

Bolt For Fastening Components, or the Ground Connection of Electrical or Electronic Components, on a Vehicle Body, a Bolt Arrangement Having a Bolt, and a Method for Forming the Bolt Arrangement
US Patent 11498160
Issued November 15, 2022
Inventors: Gerhard Brenninger, Schwindkirchen, Germany; Thomas Engelberger, Au in der Hallertau/Osterwaal, Germany; and Hannes Vasold, Schweitenkirchen, Germany
Assignee: Bayerische Motoren Werke AG (BMW), Munich, Germany
A bolt is provided for fastening a component or a ground connection of electrical or electronic components to a vehicle body. The bolt has a head portion with an external thread, the head portion being formed from a steel material, and a foot portion. The foot portion is formed from an aluminum alloy and is connected integrally to the head portion by a friction-weld connection. The bolt is configured in the form of a welding stud for drawn arc stud welding, for which purpose it has an ignition tip on its end side, which delimits the foot portion.

Anti-Loosing Bolt Component Capable of Presetting Torque and Controlling Disassembly
Us Patent 11499586
Issued November 15, 2022
Inventor: Zuoyu Gong, Guigang, China
The disclosure relates to an anti-loosing bolt component capable of presetting torque and controlling disassembly, including: a nut, a bolt and a tab washer that match each other. The nut is provided with a ratchet structure, the bolt is provided with an axial groove, and the tab washer is provided with a elastic pawl matched with the ratchet structure, and a horizontal protrusion provided with a prefabricated notch and matched with the axial groove. The ratchet structure adopts a matching mode that the difference between the number of ratchets and the number of the elastic pawls is 1, so that the nut can be engaged by a very small rotation angle. The preset torque of the prefabricated notch can be set according to a safety factor. The bolt component can be accurately prevented from loosening.

Fastener
US Patent 11499585
Issued November 15, 2022
Inventor: Douglas E. Hersh, San Diego, CA, USA
Assignee: Sentient Design, Inc., San Diego, CA, USA
A nut-and-bolt fastener is provided. The nut and bolt are configured with a plurality of interlocking teeth that provide unidirectional travel of the nut with respect to the bolt. In particular, the configuration of the teeth arrest separation of the nut from the bolt while permitting the nut to move toward the head of the bolt into a fastened engagement. The teeth are non-helical and arranged concentrically around the longitudinal axis in evenly-spaced steps or segments along the longitudinal axis and around the shaft of the bolt and bore of the nut. Integral winged washers are provided on the bolt head as well as on the nut. Variations with different rake angles of the teeth as well as an expandable nut are also provided.

Fastener Assembly
US Patent 11499583
Issued November 15, 2022
Inventor: Earl Allen Size, Jr., Rochester Hills, MI, USA
A fastener assembly having a nut with interior threads extending from a first end to an intermediate end wall, a narrowed diameter aperture extending from the end wall toward a second end. A first screw has a shaft exhibiting a first exterior thread pattern rotationally inter-engaging with the interior threads of the nut when installed through the first end. A recess formed in an end of the shaft exhibiting a further plurality of interior threads matching a direction of the first thread pattern. A second screw has a second exterior thread pattern opposite the first pattern and, upon being installed through the narrowed aperture, rotationally inter-engaging the interior threads of the first screw, with loosening of either screw being prevented by their counter-threaded orientation. A head of the second screw exhibiting an outer annular rim establishing a resistance fit within an entranceway location of the nut.

Torque Limiting Screw
Us Patent 11493075
Issued November 8, 2022
Inventors: Michael Maloney, Doylestown, PA, USA; and Robert Stotz, Jr., Sellersville, PA, USA
Assignee: Penn Engineering & Manufacturing Corp., Danboro, PA, USA
A compound screw is a two-piece assembly where the head of the screw can rotate in the tightening direction to a designed tightening torque to drive the screw while being able to positively counter-rotate in the loosening direction. The screw assembly comprises a screw and a cap surrounding the head of the screw. The screw has a head at the top and a threaded shank downwardly extending from a base of the screw head. The screw is turned by turning the cap about a central axis of the screw. The cap is rotatably affixed to the screw head by a loose riveting of the cap to the top most end of the screw head by flaring a thin-walled upwardly extending portion thereof. The cap includes a plurality of axially extending peripheral resilient arms which engage peripheral cam surfaces around the outside of the screw head.

Self-Drilling Screw
US Patent 11486433
Issued November 1, 2022
Inventors: Kou-Tsair Su, Kaohsiung, Taiwan; and Yu-Jung Su, Kaohsiung, Taiwan
Assignee: Taiwan Shan Yin International Co., Ltd., Kaohsiung, Taiwan
A self-drilling screw includes a leading section having a drill body and opposite discharge grooves formed on the drill body. The drill body and the discharge grooves meet at cutting edges. On the drill body are formed two blade portions connected to the cutting edges and tapering at respective second tips. The blade portion has a second included angle of not more than 50 degrees. Between the blade portions is formed a drilling portion terminating at a first tip and having a first included angle of not more than 60 degrees. Two opposite concave surfaces each extend from the drilling portion to each blade portion. The first tip and the second tips are situated at different places. Accordingly, the end of the leading section presents a shape of a curved bow riser to cut quickly and help quick removal of chips, thereby decreasing resistance and preventing the cracking problem.

Rivet Dispensing Systems and Methods of Use Thereof
Us Patent 11471932
Issued October 18, 2022
Inventors: Daniel Peter Vanderzwet, Omemee, ON, Canada; Simon Maurice Britton, Windsor, ON, Canada; Larry Frank Koscielski, LaSalle, ON, Canada; Eric Jean Michaud, Amherstburg, ON, Canada; David Mario Simone, Amherstburg, ON, Canada; Donald J. Spinella, Greensburg, PA, USA; Gino N. Iasella, Pittsburgh, PA, USA; Daniel Bergstrom, Sarver, PA, USA; Robert B. Wilcox, McGregor, TX, USA; Thomas R. Kingsbury, Waco, TX, USA; and Graham Scott Musgrove, Waco, TX, USA
Howmet Aerospace Inc., Pittsburgh, PA, USA
Rivet dispenser systems and methods of use thereof are provided. In a non-limiting embodiment, the rivet dispenser system comprises a rivet receiving member defining a channel therein, and a seat member. The channel includes a curved region. The rivet receiving member comprises a first port and a second port. The first port communicates with the channel and is configured to receive rivets. The second port communicates with the channel and is configured to dispense rivets. The channel extends between the first port and the second port and is configured to transport rivets from the first port to the second port in a series arrangement and in a preselected orientation. The seat member communicates with the second port and is configured to selectively engage with a rivet holder of a resistance spot rivet welding apparatus and introduce a single rivet to the rivet holder at one time.

Eco-friendly Fastener Structure with Lockable Stainless Steel Screw Pair
US Patent 11454272
Issued September 27, 2022
Inventor: Chien-Fang Yang, Pingtung County, Taiwan
The two lockable stainless and lossless screw pairs at two ends of the bolt are provided both to avoid screw pairs stained or destroyed by strain force from loading and to decrease the cost because of energy consumption in traditional process of bolt or its cost from environmental pollution.

Retained Self-aligning Washer and Nut Assembly and Method for Fabrication by Additive Manufacturing
US Patent 11448254
Issued September 20, 2022
Inventors: Marc Storozuk, Winnipeg, Canada; and Richard W. Aston, Brea, Canada
Assignee: The Boeing Company, Chicago, IL, USA
A washer and retained nut assembly has a washer with a retaining flange and a positioning cavity and a nut received in the washer. The nut has a shoulder received in the positioning cavity with a top surface of the shoulder engaging a lower surface of the retaining flange in a loose condition of the washer and nut. The nut further has an engagement surface contacting a receiving surface in the washer in an engaged position of the washer and nut. The nut further has a peripheral surface engaging a blocking surface in the washer with the nut and washer in a maximum offset angle orientation between the washer and nut in the engaged position.

Positive Locking Fastener
US Patent 11448253
Issued September 20, 2022
Inventors: Mohamed Abou Halima, Gennevilliers, France; and Loic Meiffre, Conflans Sainte-Honorine, France
Assignee: LISI Aerospace, Paris, France
The invention relates to a positive locking fastener comprising: a screw (1) having a radial hole (120) at a threaded portion (12); a nut (2) having a tightening portion (21); a cap (3); and a pin (4). The cap has a locking portion (31) intended to cover the threaded portion and a blocking portion (30) intended to engage with a tightening portion of the nut. The blocking portion comprises at least one pair of diametrically opposed openings (32) suitable for allowing a pair of openings to be aligned with the radial hole, in order to allow the pin to be inserted and thus lock the fastening regardless of the relative position of the nut with respect to the screw. The invention also relates to a method for implementing the fastener according to the invention.