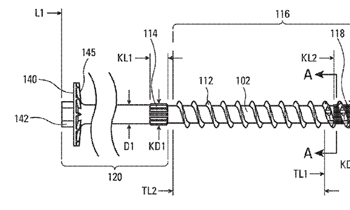 Variable Thread Knurl Fastener
United States Patent 11,181,138
Issued November 23, 2021
Inventor: Jeremy Scott Park, Bethpage, TN, USA
Assignee: Simpson Strong-Tie Company, Inc., Pleasanton, CA, USA
A fastener includes a shank having a point at a first end and a second, head end. A first portion of a thread is formed with a first thread angle and a second portion of the thread is formed with a second thread angle. One or more knurls are provided in the shaft in the threaded or unthreaded regions of the fastener. The thread may be serrated or jagged over one or more portions of the fastener, including the area of the first thread angle.

Wood Screw and Method for Producing a Wood Screw
United States Patent 11,174,887
Issued November 16, 2021
Inventors: Patrick Roll, Schwabisch Hall, Germany; and Joachim Glattbach, Pfedelbach, Germany
Assignee: SWG Schraubenwerk Gaisbach GmbH, Waldenburg, Germany
The invention relates to a wood screw having a screw head having a drive configuration, a screw shank which emanates from the screw head and which at least in portions is provided with a thread, and a drilling tip which adjoins the thread, wherein the drilling tip is configured without a thread, wherein the drilling tip has two longitudinal cutters which continue up to a terminal point of the drilling tip and which run so as to be curved in relation to a central longitudinal axis of the screw, and wherein a circumference of the drilling tip between the two longitudinal cutters does not have any
further cutters.

Expansion Screw Structure
United States Patent 11,174,885
Issued November 16, 2021
Inventors: I-Fang Wang, Lukang Township, Taiwan Assignee: Masterpiece Hardware Industrial Co., Ltd.,
Lukang Township, Taiwan
An expansion screw structure contains an anchor for mating with a screw. The anchor includes a first segment and a second segment which have a central axis and a shank. The anchor further includes a head which has a slot. The shank includes a first threaded section, multiple cutouts, a decreasingly conical tip, a second threaded section, a slit, a first support foot, a second support foot. The slit has a first part, a second part and a third part. The second part has a first raised portion, the second part has a second raised portion, and the third part has a connection section and a thin coupling strap. The thin coupling strap has a first thickness, the connection section has a second thickness, and the first thickness of the coupling strap is 1/3 of the second thickness of the connection section.

Thread-Forming Screw
United States Patent 11,156,248
Issued October 26, 2021
Inventors: Georg Vogel, Ingelfi ngen-Eberstal, Germany; and Jan Buchle, Pfedelbach, Germany
Assignee: Arnold Umformtechnik GmbH & Co. KG, Forchtenberg-Ernsbach, Germany
A thread-forming screw which is provided in particular for thin, perforated sheet metal contains a threaded shank which below the screw head is initially configured so as to be cylindrical and then continues to a conical forming portion. The screw shank within the forming portion has a rib forming an incomplete counter thread.

Fastener Assembly Having a Component-Isolating Grommet
United States Patent 11,149,768
Issued October 19, 2021
Inventors: Chad M. Clark, Stamping Ground, KY, USA; Ronald Owens, Lawrenceburg, KY, USA; Michael
Fullerton, Clarkston, MI, USA
Assignee: Illinois Tool Works Inc., Glenview, IL, USA
A fastener assembly is configured to securely couple to a component. The fastener assembly includes a compression-limiting bushing, a fastener coupled to the bushing, and a grommet coupled to the bushing. A clearance gap is defined between one or both of the bushing or the fastener and the grommet. At least a portion of the grommet is configured to move into the clearance gap as the fastener assembly is urged into an opening of the component. The grommet is configured to securely couple to the component.

Hidden Fastener Unit and Related Method of Use
United States Patent 11,149,445
Issued October 19, 2021
Inventors: Roger A. Vandenberg, Hudsonville, MI, USA; and Todd E. A. Schwartzkopf, Hudsonville, MI, USA Assignee: National Nail Corp., Grand Rapids, MI, USA
A fastener unit and related method for securing a board to a support is provided. The fastener unit includes a spacer block, a grip element extending from the spacer block and configured to fit in and engage a groove of the board, and one or more resilient compression elements joined with the spacer block. The resilient compression elements can be vertically compressible so at least a portion of it can move from an open mode to a compression mode and fi t within, then forcibly expand within, the groove, thereby securing the spacer block in a position adjacent the groove to establish a gap between the board and another board. Related methods of use also are provided.

Intelligent Bolts and Methods of Their Use
United States Patent 11,149,777
Issued October 19, 2021
Inventors: Csaba Madru, Haljarp, Sweden; and Matts Lilja, Helsingborg, Sweden
Assignee: Strain Labs AB, Stockholm, Sweden
An intelligent bolt includes a head region and a threaded region. The head region includes a bolt cavity. A distance between the head region and a bottom end of the cavity changes in operation as a function of longitudinal stress applied between the threaded region and the head region, and the bolt includes a sensor arrangement for measuring changes in the distance. A distal end of the sensor arrangement is disposed adjacent to the bottom end, wherein changes in spatial position of the bottom end relative to the distal end occur as a function of changes in the stress applied to the bolt to defi ne a gap “G” whose size varies depending upon the stress. Interrogating radiation transmission in operation via the gap “G” from a source to a corresponding radiation sensor of the arrangement generates a stress measurement signal that is processed for wireless communication.

Easily Removeable Push-On Spring Nut
United States Patent 11,149,775
Issued October 19, 2021
Inventors: Michael Maloney, Doylestown, PA, USA; and Jonathan Brunk, Philadelphia, PA, USA
Assignee: Penn Engineering & Manufacturing Corp., Danboro, PA, USA
A fastener is installed by applying an axial pressing force onto a mating component such as a round pin or a square tab. The fastener includes spring arms formed by bent tabs which deflect when pressed onto and grip the pin or other mating component between jaws of the arms making the fastener resistant to being pulled off . Downward facing fingers located around the periphery of the fastener flex when they come into contact with another portion of the mating component. This creates a residual clamp load between the fastener and the component. The fastener can easily be removed using a tool similar to snap ring pliers or needle nose pliers. Two holes on opposite sides of the fastener allow the part to be squeezed and deformed into an oval shape. This action disengages the arms and allows the fastener to slide off the mating component without resistance.

Two-Piece Blind Fastener
United States Patent 11,143,226
Issued October 12, 2021
Inventor: Terry Vovan, Upland, CA, USA
Assignee: SPS Technologies, LLC, Jenkintown, PA, USA
A blind fastener for connecting panels includes a bolt and nut. The bolt includes a shaft, bolt head, and lug. The bolt head is between the shaft and lug. The shaft defines external threads opposite the bolt head. The lug includes a first tool engagement portion and first frangible portion that connects the
lug and bolt head. The nut includes a sleeve, nut head, and handling member. A central bore of the sleeve receives the shaft and defines internal threads mated with the external threads. The nut head is between the handling member and sleeve. The nut head extends radially from the sleeve and defines a recess that receives the bolt head. The handling member surrounds a portion of the lug. The handling member includes a second frangible portion and a second tool engagement portion. The second frangible portion couples the second tool engagement portion to the nut head.