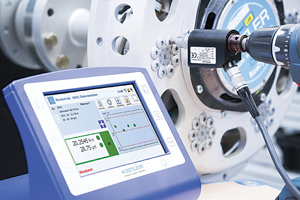 An Interview with Wilfried Blechmann, Head of Business Line Fastening Technology at Kistler. Bolted joints must function safely and reliably to avoid extra costs, recall actions or recourse claims. In this interview, Wilfried Blechmann, Head of Kistler’s Fastening Technology Business Line, explains the key points in quality assurance for fastening technology, and he goes on to describe the systems that provide effective support for users in every step of the process.

Question: Mr. Blechmann, fasteners have been around for seven centuries, and they were already added to the DIN catalog of standards back in the 1930s. Why does this triedand- tested joining method still play such an important part nowadays?

Wilfried Blechmann: There are two good reasons for that. First, the bolted joint is the only joining method that can be released without destruction—and as a general rule, the joint can be used again. Also, fasteners are becoming smaller and lighter all the time, so they are highly versatile. That’s why they also have a part to play in Industry 4.0—in the automotive and aviation sectors, medtech, electrical engineering, wind power technology, construction and many other areas of industry. The second reason is the safety aspect, which is a major issue in connection with bolted joints. Just picture a container weighing many tons, suspended from a construction crane as it is transported above a site full of people—and it’s held in place by just a few fasteners. Or think how many safety-critical bolted
joints there are in a car—for the wheels, axles, the transmission, doors, brakes and even the safety belts and air bags.

Read the full interview in the digital edition